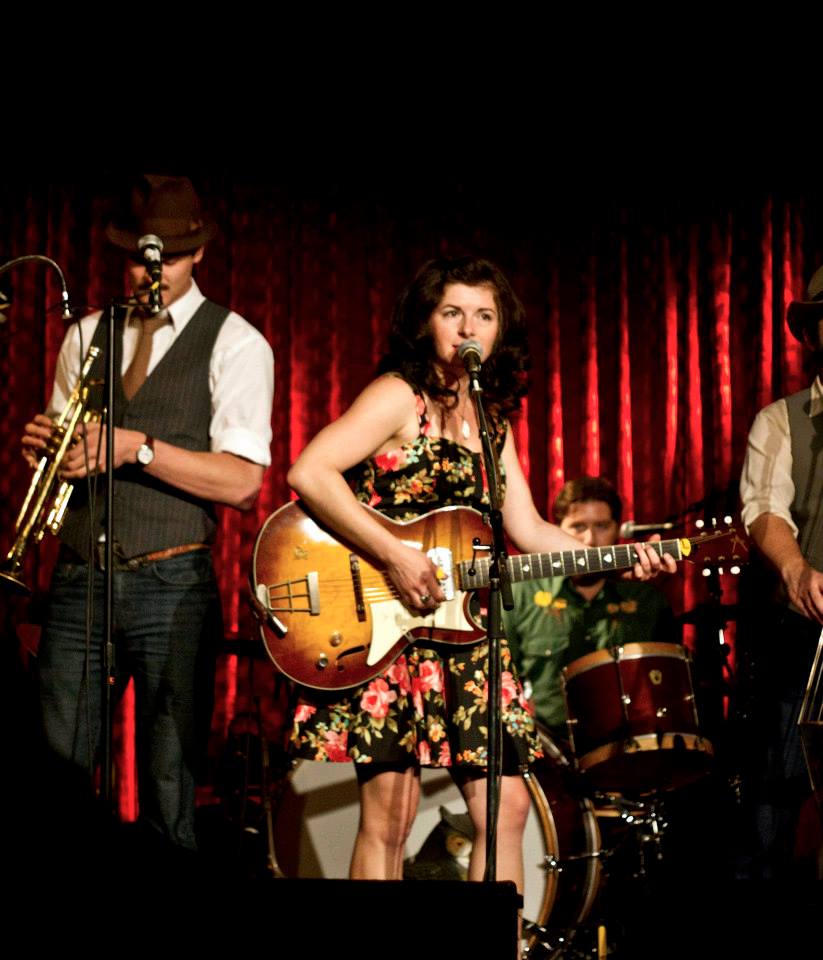 It had been almost 10 years since Little Miss Higgins had performed at Bozzini’s then she returned in October 2017  for a sold out show and we remembered what a great performer she was, so we were glad to have her back again for another sold out show back i July and this time she is here with her Trio again on Saturday night so we are doing 2 shows !

For her newest release, Bison Ranch Recording Sessions, Little Miss Higgins teamed up with a very talented quintet of musicians from Manitoba. She calls them the Winnipeg Five-Jimmie James McKee on trumpet, Eric Lemoine on banjo and pedal steel, Blake Thomson on guitar, Patrick Alexandre Leclerc on upright bass, Evan Friesen on drums and all five of them sing harmonies. As they play music in a similar vein as Higgins, it was a fitting alliance both onstage and in the studio…well, not quite a typical recording studio. With new songs waiting on the sidelines, the six of them decided to record in a barn, a barn on a bison ranch in rural Manitoba.

The barn was built in 1951. It serviced farm life for many years, until it was moved in 2004 to the Renaissance Bison Ranch, during which it was restored and the loft (no longer a hay loft, but where the music would be made) was turned into what might be considered a recreational space with a Ping-Pong table, shuffleboard and a wood stove.

Before they could begin, they had to build sound baffles, load gear up the wooden steps, and stack a cord of wood to keep the wood stove going (though they imagined it would be spring and the temperature would begin to rise when they went to the barn to record, it was the coldest April on record in the Canadian prairies. There was still snow on the ground, still snow on the tin roof that slide off a few times causing the band to have to stop and restart.) The album was engineered by Steve Loree and co-produced by Higgins and Winnipeg Five bass player, Patrick Alexandre Leclerc. Everything was captured live off the floor-fire crackles and crow cawing included. The experience of recording live brought out the authenticity of the music, the talent of the musicians and the connection of the group. This was an important part of the process for Higgins and Leclerc. What you hear is how it happened.

The album was mixed by Blake Thomson and mastered by Jamie Sitar, both in Winnipeg, Manitoba. Also, just as she has done on all her past four albums, Higgins did the artwork and design for the cover of Bison Ranch Recording Sessions. No bison were harmed during the recording, though just below the floor where Higgins stood during recording was a pile of bison skulls listening to every moment of music that was made in the barn.

LMH Bio From the Great Northern Plains of Western Canada, Little Miss Higgins struts and serenades her way, guitar in hand, lips blazoned red, onto any stage. As if she just drove in off the back-road of another time, this pocket-sized powerhouse plays music influenced by old-time country blues, jazz and folk. Whether it’s songs about passion or songs about panties, she writes about real things in a rooted and poetic way.

Little Miss Higgins (aka Jolene Higgins) was born in Brooks, Alberta, raised in Independence, Kansas. Then, as an adolescent, moved back to Canada.

Music entered her life early. “When I was about four my dad bought this old piano at a local saloon because he didn’t have one,” she recalls. “It was a mini grand piano. When it got to the house he told me it was mine. One of my first memories is carving my name in the side of it. Then I started taking piano lessons.”

Though she grew up playing piano, Higgins now uses guitar and voice as her main instruments as well as her theatre background to bring a refreshing sound and story to the stage. She spent a number of years after studying theatre at a college in Alberta, roaming Western Canada, acting in plays, frequenting blues clubs and playing her guitar. Higgins moved to Saskatchewan in 2002 and that’s when music took the driver’s seat.

Her stage name, Little Miss Higgins suits the undeniably inflammatory mix of her blues and country music repertoire but the moniker was largely accidental. “When I first moved to Saskatchewan I met a guy who called me Little Miss Higgins. So, I used it on poster for one of my gigs and it stuck.”

Her first four albums Cobbler Shop Sessions (2005), Junction City (2007), Live: Two Nights In March (2009) and Across The Plains (2010) showcase Little Miss Higgins as a highly-developed songwriter as well as a remarkable country blues performer in a style highlighted by guitarist Foy Taylor and many other guest roots musicians from the Canadian prairies. The release of these albums has resulted in a number of honours winning Western Canadian Music Awards and being nominated for Maple Blues Awards and a JUNO.

Higgins has built a strong national reputation throughout Canada, appearing in clubs and on festival stages from B.C. to Newfoundland mostly as a duo with guitar player Foy Taylor. And now with the Winnipeg Five she will continue to please and expand her fan base across Canada, as well as internationally. Recently, she and the band performed on Stuart McLean’s Vinyl Café for CBC radio.

The Winnipeg Five Though Little Miss Higgins identifies these fine fellows as the Winnipeg Five, they also play under another handle called the F-Holes. They have been sharing their unique blend of country, Dixieland, Manitoba roots music with audiences across Canada since 2004.

They have recorded three albums, the self-titled debut F-Holes (2009), Angel In The Corner (2011) and Red Hot (2013) which is only available on vinyl or digital download.

These talented five have received critical acclaim for their unmistakable, vintage inspired sound and passionate live performance. Their musicianship is undeniable as a group or individually, they have backed or played with many other Manitoba artists. They are one of the hardest working bands in Western Canada.