Kitty & the Rooster and Shirley Gnome 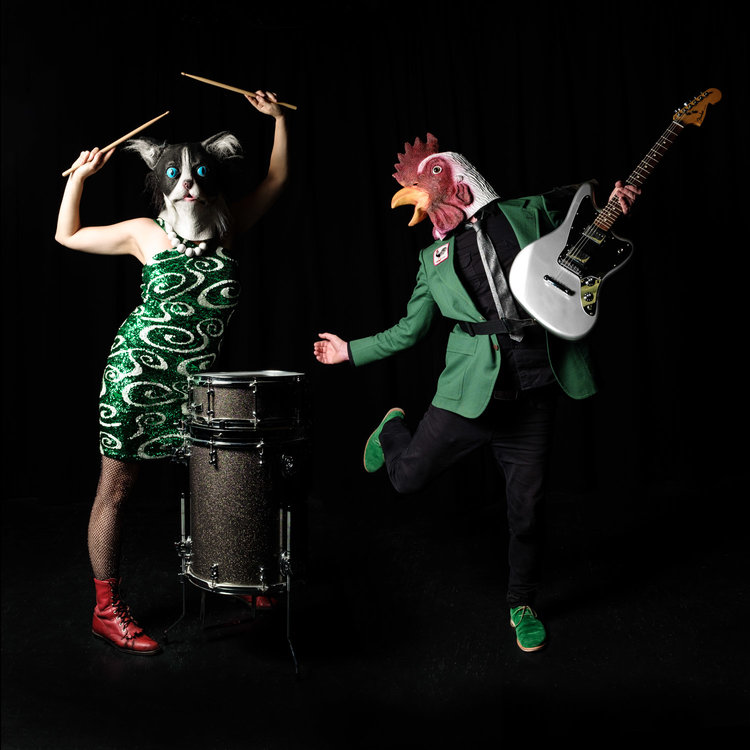 Bozzini’s Holiday Concert Special
Kitty & the Rooster (CD release) and Shirley Gnome Double Bill
Saturday December 22 2018Doors 8:00 Show 9:30
Tickets $ 20 available at Bozzini’s or call 604 792 0744 to reserve
(No refunds – exchanges for a future show allowed up to 48 hrs prior to showtime)
Although Bozzini’s Upstairs is always an all ages venue This show will contain adult Humour

Kitty & The Rooster is a rock n’ roll duo from Vancouver, BC featuring Jodie Ponto on the stand-up cocktail drumkit and Noah Walker on electric guitar. They are known for their surf-tastic hooks, clever lyrics, and ridiculously fun shows.

Kitty & The Rooster’s debut album One Gig Hard Drive is a funny-because-it’s-true romp across the Canadian backroads. The 11-track album documents the hilarious, and at times absurd, life of the un-famous travelling musician. With clever word play, laugh out loud scenarios and some “did they really just go there?” moments, Kitty & The Rooster tell-all with the kind of honesty usually only found within the four walls of a tour van.

For a duo, Kitty & The Rooster make quite a lot of noise. One Gig Hard Drive invites you to get up and shake it with an old-fashioned surf stomp. The album is fortified with vintage guitar sounds, slapback vocals, dirty drums, and Kitty & The Rooster’s trusty backup singers The Cockettes.

“She’s dark, sexy, over-the-top and she’ll sing songs that will make sailors blush: meet cabaret comedian extraordinaire Shirley Gnome. How can one woman be so honestly obscene and so entertaining?” -Sunday Mail, Australia
From the west coast of Canada comes this multi-award winning cabaret musician, whose all original music about sex and human nature is hilarious, uncensored, honest, subversive, irreverent, witty, empowering, taboo and not for the faint of heart. Her cleverly carnal lyrics go down smooth with her inappropriately gorgeous vocals, and her charm will disarm you through even the most provocative topics. Her outlandish cover songs transform top 40 hits into dark social satire; you can’t unhear it once you’ve heard it Shirley’s way.

Her one-woman cabaret shows have wowed audiences and critics alike, with sell out shows across Canada, the US, Australia, New Zealand and the UK. You may have heard her on Dan Savage’s podcast The Savage Lovecast and on SiriusXM. She is signed with Canada’s largest independent music label (604 Records). Her latest album Taking It Up The Notch debuted at #1 on the iTunes comedy charts in Canada when it debuted in late 2017. She closed out the Melbourne International Comedy Festival’s all-woman showcase UpFront last year.

Shirley Gnome grew up in Surrey, a Canadian city known for it’s extremely high crime rate and loose women. After dropping out of high school, Gnome began teaching herself the guitar while working a number of odd jobs (including drug dealer, bartender and ice cream truck driver, which she found to be surprisingly similar). She began writing what others called “dirty country” songs, which she simply referred to as “songs”. Having a reputation for doing anything for a glass of whiskey, a friend coerced her to perform some of her songs at a burlesque show by offering her Jack Daniels. The performance went over well, with patrons asking if Gnome had a CD. Inspired by the noble artistic goal of making easy money, Gnome wrote more songs and recorded them with a bunch of her alcoholic friends, releasing “Ho Down” in 2009. The CD was a great success, and lead Gnome to more opportunities to drink whiskey for free. This ended up bringing her to the People’s Champ of Comedy Competition, which she surprisingly won – taking home $20,000. She recorded another album with a whole band of real musicians, and paid them in whiskey. Before spending all of her prize money, she put together a show and sent herself to the Edinburgh Fringe Festival, which she had read to be the birthplace of whiskey. Stumbling through a 22 show run, she received rave reviews and decided she was probably terrible at music and should stop. But since she was essentially unemployable, she continued doing the only thing she knew how to do well (besides HJs) and found success touring Canadian Fringe and Burlesque Festivals. She was nominated twice for a Canadian Comedy Award for Best Variety Act in 2014-15 and lost to clowns both times. Gnome released yet a third album of smutty filth-bombs last year, and will be touring across North America and Australia this year while finding any opportunity she can to, you guessed it, drink whiskey. She was also drunk when she wrote this bio and she thinks you’re just beautiful, man, and she loves you.