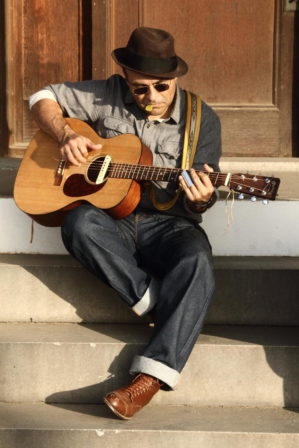 So excited for this show! Last year Lance performed solo and was fantastic but this time it’ll be even better with the Flood featuring Daniel Burt on Snare and Stomp Box & Jake Finney Up Right Bass. Joe Nolan performed at Bozzini’s a few years back and is one of the finest Roots & blues singer songwriters in Canada.
Two hours of great music with California’s Lance Canales & the Flood with special guest Joe Nolan

Having grown up in an agricultural community in San Joaquin Valley, California, Lance Canales was brought up in a tradition of hard work, folk and blues. Drawing on this background for inspiration, Canales wrote his new album The Blessing & The Curse, due out later this month, encapsulating the spirit of his work ethic. Learning guitar at a young age, Canales thrived in listening to blues and folk music, where he expresses that there is “no room for pretension in that music…it’s so raw and real.”

Lance Canales & The Flood are a roots-blues influenced Americana trio from California’s breadbasket, where Canales lived the life that so many songs have been written about since the birth of roots music – hard labor, one room shacks and taunting ghosts whispering of a better life. Canales’ guttural vocals combine a hard-edged storytelling approach beneath a stripped down, foot-stomping, acoustic instrumentation.

Now, signed to Music Road Records, Canales is able to share his music with the world and plans on touring in support of the album. However, he has no intention of quitting his day job as a janitor, but will instead continue to write music.

“Lance Canales seems to summon the spirits and ghosts that travel with the migrant workers in California’s Central and San Joaquin Valleys. Other writers like Tom Russell and Dave Alvin have created some vivid observations about these people and this area in their material, but, having grown up there, Canales delivers first-hand observations, and in doing so, puts forth one of the grittiest, sweatiest vibes you’ll hear on any record.” Jim Hynes- Elmore Magazin

“This album is the one of the biggest breakthroughs of the year and the most compelling I’ve heard in a long time. It’s clearly Canales best work yet, as we see him unifying the thread between the Latino community and folk-blues music.” Marlena Fitzpatrick- Latino Rebel Magazine

“The big buzz at Folk Alliance this year was around Lance Canales, who had us all on the edge of our seats as he stomped across the stage delivering a stark blues twang-and-thump set that sounded like it had been born somewhere between a back alley and a field worker’s camp. If this isn’t authentic roots music then I don’t know what is.” Eliza Gilkyson

Joe Nolan makes a remarkably dynamic return in his forthcoming release, Cry Baby. A truly prolific songwriter, Joe has taken the time needed to assemble eleven songs that make perfect sense together. The album’s concept takes you on a trip of melancholic madness. Through darkness and depression, booze-filled evenings and fractured relationships, Joe is unabashed in sharing his deepest secrets and honest outlooks. There is a charm in his chaos, a youthful maturity, a broken journey but a hopeful return.“Cry Baby is the album I’ve always wanted to make, to showcase my true colours. It’s a rock n roll album that swells to a whispering hush. This is a pivotal album for me; my confessional. I am so looking forward to getting back in the ring and on the road. There’s excitement in opportunity and a fresh start”Nolan’s live performance is easily remembered; through vocal howls and whispers, delicate and diverse arrangements, there’s always an intimate audience connection. Joe’s been performing non-stop over the past few years, building an ever-growing fan base. He has shared stages with established artists Melissa Etheridge, Wilco, Lydia Loveless, Whitehorse, Shakey Graves, The Strumbellas, Todd Snider, Colin Linden, Sam Baker, Gurf Morlix, the Guilty Women, and the legendary Peter Asher.