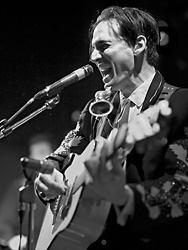 Petunia is more than just an entertainer, he’s a modern musical enigma.  Imagine that David Lynch and Nick Cave had a hillbilly baby, that yodeled… or Tom Waits meets Elvis at Woody Guthrie’s hobo junction.  This is just one way of describing the man known simply as Petunia.  He’s an adventure seeker, a poker player, and a mysterious stranger.  He’s been referred to as “The Savior of Country Music”, and a man who exists in a different era, bringing the past forth as something new to be celebrated and not forgotten.

Petunia grew up in rural Quebec, in exactly the sort of surroundings that a country musician would find idyllic, with old dilapidated barns, secret forts, and acres of unspoiled land.  As an adult, the wandering spirit took a firm hold on his life, so he set out on the road, playing every major street corner across Canada and throughout the NYC subway system, before graduating to full fledged touring musician.  When he’s not on the road playing shows, Petunia is also involved in the theatre world; building side projects, writing scores, acting, or collaborating with theatre artists.  He currently resides in Vancouver BC, and works with several sets of sidemen across Canada, the US and Europe in addition to his own Vancouver based band, The Vipers. A restless wanderer, a musical historian, and a quirky yet amazing talent, Petunia is simply a Canadian treasure joining the greats from north of the 49th.

The Burying Ground is an upbeat blues string band that brings the fire of punk to the technical prowess and distinct sounds of such early blues, country and jazz masters as Blind Blake, Bessie Smith, Gary Davis, Memphis Minnie, Big Bill Broonzy, Jimmie Rodgers and many others.
If you’ve ever woken up in the morning and your first thought was a song, you’ll understand something of the devotional quality that drives their music. Woody’s complex blues guitar and rags are punctuated and raised high by Devora’s tightly syncopated washboard, with playful rolls and staccato jumps and stops.

The Burying Ground formed in 2014 as a duo, but Woody Forster and Devora Laye have been playing together since 2009 as members of The Dire Wolves, an acoustic blues string band and darlings of the East Van punk scene. They are steeped in influences from 1920s ragtime, country, Mississippi blues and New Orleans Jazz to the backyard punk shows and great barrooms across Western Canada. In the past year of frequent touring, The Burying Ground has developed a bright clarity, adding several toe tapping dance numbers to their diverse sets.

At home, Devora and Woody are accompanied by Joseph Lubinsky-Mast (Petunia and the Vipers, Wooden Horseman) on upright bass and Josh Doherty on harmonica (also formerly of The Dire Wolves). They often perform with guests on trumpet, fiddle, tenor banjo, clarinet. As a full band they have a lively and gritty sound with tight harmony and a driving rhythm section reminiscent of the music of the juke joints and jazz halls of the 1920s and ’30s. The band moves effortlessly between toe-tapping dance music, the yearning of country blues and the embellishments and energy of ragtime and jazz.

​In January 2017, The Burying Ground released Country Blues & Rags, a collection of the band’s renditions of some of their most beloved songs.

​Their soon-to-be released self titled album features songs written and composed by Woody and Devora. The album is eclectic, spirited and adventurous and takes The Burying Ground’s sound to new heights and familiar perches alike.

​A band that shines when performing live, The Burying Ground has been charming audiences large and small across Western Canada, lending new life to old songs while performing original tunes that reference the 1920’s and 30’s but are for decidedly modern audiences. Known for their songwriting, they aim to shed light on aspects of the human experience that resonate into the modern day, touching on mental health, the traumas of war, social justice and good old fashioned lost and found love.

​“..lucky to run across The Burying Ground busking at the ferry terminal and then tracking down their Salt Spring gig…..we could have sat their all night listening to their sweet sounds. One of the best string – washboard – saw combinations I’ve heard in a long time. Glad they are Vancouver based…”

​“If you have the opportunity to see The Burying Ground perform, do not miss their innovative musical interpretation of blues and rags, with a modern perspective, that few bands have mastered.”