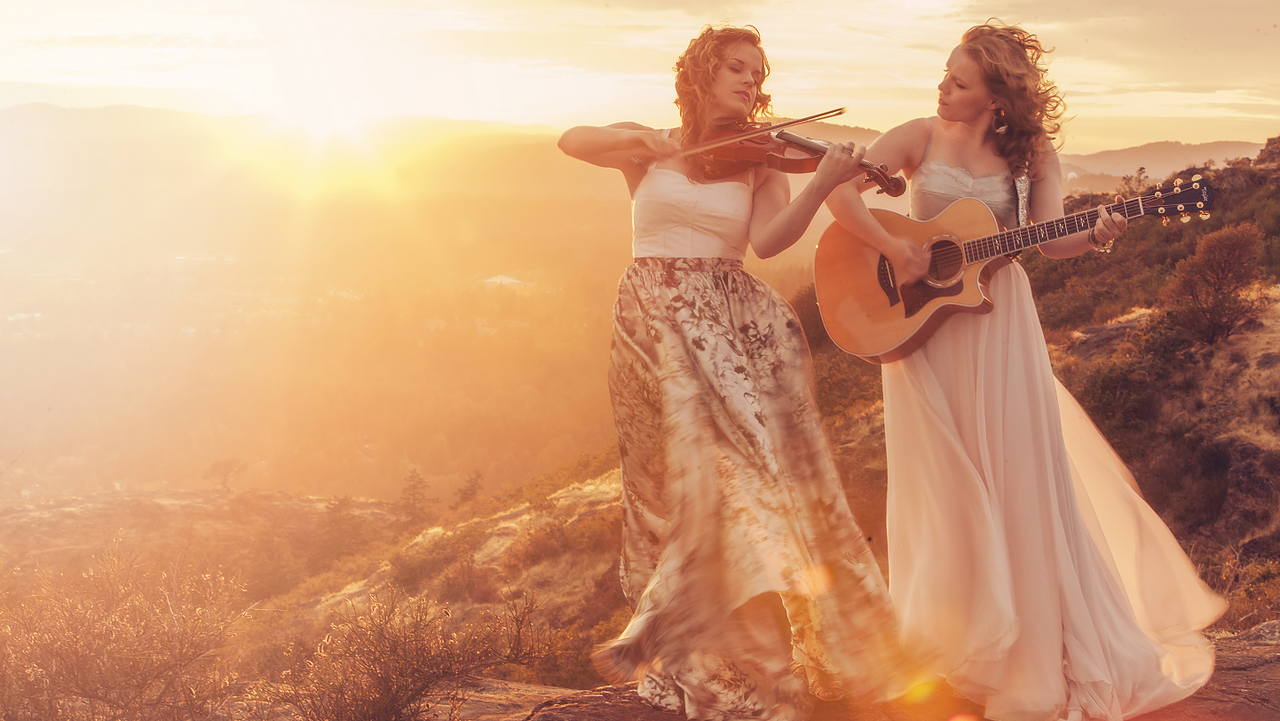 Their musical bond is as strong as their small town roots – Twin Kennedy, comprised of West Coast sisters Carli and Julie Kennedy, have been making music together since they could talk. Born and raised in the small town of Powell River, Twin Kennedy grew up perfecting their sibling harmonies and dynamic live performances, while making their name known throughout their small community as a family band.

Growing up in such a musically infused family, it is no wonder that these sisters crafted their sound through a unique fusion of their background in country, folk, jazz and classical music. With years of classical training, including their Bachelors Degrees in Music Performance from the University of Victoria, the sisters have found their home in country music. With Carli on vocals and guitar, and Julie on vocals and violin, these petite powerhouses will fill your soul with joy and warmth through their seamless harmonies and heartfelt songwriting. No bond compares to that of sisters, and the same is to be said about the blend of their kindred voices.

With two EP’s in their back pocket as Carli & Julie Kennedy, these sisters came into 2015 making a splash in the Canadian country music scene, releasing their debut LP as Twin Kennedy, which earned them two Canadian Country Music Award nominations, a Western Canadian Music Award nomination for Producer of the Year, and two Vancouver Island Music Award wins for Song of Year and Country Recording of the Year. Produced by multiple CCMA and JUNO award winning artist George Canyon and renowned West Coast producer Graham Sharkey, It’s a Love Thing is a beautifully honest account of the ebb and flow of the navigation through love and life. From the uplifting opening track “Get Back Up Again” to the heartbreaking vulnerability of “That’s What I Should Have Said” Twin Kennedy has compiled a track listing that is self-described as a true extension of themselves. Their latest single, “Secondhand Gold” was the Grand Prize Award winner in the Country category of the 2015 John Lennon Songwriting Contest and the 2016 Lennon Award winner for Best Country Song.

“Nothing Short of Awesome!” Cashbox Magazine

Music is as inseparable from their lives as they are from each other, “Everything starts as a duo. We write together, rehearse together, live together, hang out together, tour together. So much togetherness!” And together, these sisters have commanded some of the top stages in Canada and beyond including performances at Canadian Music Week, Canada Place, Sunfest, Rockin’ River Music Festival, Vancouver Island Exhibition, the Vancouver Olympics, and the Live at Heart Festival in Sweden.

“…MAN could they play their instruments! These two are true pioneers in the folk, jazz and Celtic genres. Carli is bouncy and effortless on her acoustic while Julie works the fiddle like Jimmy Hendrix on an electric guitar.” Lithium Magazine

With ten BCCMA Award nominations since 2012, Carli and Julie have been a highly recognized duo throughout the West Coast music community. Most recently, Twin Kennedy was nominated for Roots/Canadiana Group of the Year at the 2016 BCCMAs. When they’re not touring from town to town on the Trans Canada, Twin Kennedy is often found writing and performing with Music City’s best. They currently split their time between their homes in Victoria, BC and Nashville, TN.

​Now is the time for Twin Kennedy. Expanding from their West coast roots, the twins have already traveled from coast to coast, bringing It’s a Love Thing to country radio across Canada. With an album launch and two cross-country tours in the books, the past two years have seen a transformation for the Kennedy sisters. New year, new name, new album – country music has found its newest sweethearts in Twin Kennedy.

​“These two girls are 100% made for the stage and made to entertain!” Nashville Music Examiner