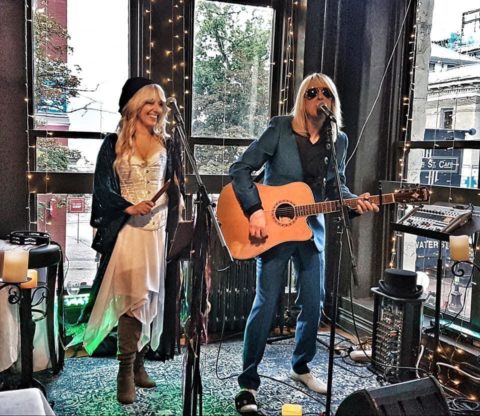 Tickets $ 22.50 at Bozzini’s or call 604 792 0744 to reserve
(No refunds – exchanges for a future show allowed up to 48 hrs prior to showtime)
Covid protocol followed: approx 16 person capacity, no sitting with any new friends/strangers as we do on occasion. All reservations will have they’re own table. volume turned down, ordering only before show & intermission (& possible drink orders via text), Please refrain from unnecessary conversation during the show. We do have the best audiences!

As both a member of Fleetwood Mac and a Solo Artist, American Singer Songwriter Stevie Nicks, has produced over forty top 50 hits and sold over 140 million records, making her one of the best-selling music acts of all time. Gold Dust Gypsy, a tribute to the songs of Stevie Nicks, stars Raphael Roquemore. Drawing on her successful career in theatre at Vancouver Opera, Roquemore has transformed herself from opera diva to rock icon for her portrayal of Nicks. Raphael Roquemore as Stevie Nicks is mesmerizing, capturing the style, vocals and mystical magic of one of Rock and Roll’s most original artists.